Michael Petley is ECU's Chief Investment Officer and Chairman of its Global Macro Advisory Board.  Michael founded ECU in 1988 and pioneered the company's flagship $1.8bn multi-currency debt management programme.  He has over 30 years of experience in managing FX mandates, presiding over the successful management of all ECU's core currency products for three decades.

Michael is a leading commentator on European Monetary Union and sat on the Advisory Council for Business for Britain along with key City and UK industry leaders.  In 2014, Michael was commissioned to spearhead an independent economic team (that included former senior economic advisers to two Chancellors of the Exchequer and the International Monetary Fund and a former Chief Economist and founding Monetary Policy Committee member at the Bank of England) that provided the economic inputs for the authoritative report "Change, or go” (published in 2015 prior to the EU Referendum), which detailed comprehensively why and how the EU needed to change and how Britain would ultimately be constitutionally and economically better off, more fiscally balanced and more structurally positioned to prosper outside an unreformed EU.

Stephen Jen is CEO and co-CIO of Eurizon SLJ Capital and a long-standing and independent member of ECU’s Global Macro Advisory Board.

Stephen’s previous roles include MD of Macroeconomics & Currencies at Bluegold Capital and an MD at Morgan Stanley where he worked for 12 years, latterly as Global Head of Currency Research.

After attaining his PhD in Economics from the MIT, Stephen spent four years as an economist with the IMF.

Fatih Yilmaz is co-CIO of Eurizon SLJ Capital, specialising in quantitative research and modelling and a long-standing and independent member of ECU’s Global Macro Advisory Board.

After his MA and PhD studies in Finance and Econometrics, Fatih was Assistant Professor of Finance at Exeter.

Previous roles include Currency Economist at Morgan Stanley, Chief European Currency Strategist and Head of Institutional Quant at Bank of America and Director of Quantitative Research and Trading at Bluegold Capital.

Robin Griffiths is a long-standing and independent member of ECU’s Global Macro Advisory Board.  Previously, Robin was Chief Technical Strategist at ECU, a role he previously performed at HSBC Investment Bank for 20 years before becoming Head of Global Asset Allocation at Rathbones, and then a director and technical strategist for Cazenove Capital Management.
Robin was a Partner of WI Carr and Head of Technical Analysis at Grieveson Grant. Robin is a committee member and former chairman of the international Federation of Technical Analysts, and former chairman, now fellow, of the British Society of Technical Analysts.
Robin has been a member of ECU's Global Macro Team for over 25 years.

Previously, Neil was Head of Trading and Execution at ECU, prior to which he was co-founder & Head of Investment at 3D Currency Management.

Previously, George was a Senior Economic Adviser at UBS Investment Bank.  His former roles include Chief Economist at UBS and Head of Fixed Income Research and Chief Economist at S.G.Warburg.
George is author of two highly acclaimed economic books: "The Age of Ageing" and "Uprising: will emerging markets shape or shake the world economy?" 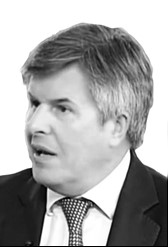 Neil MacKinnon is a long-standing and independent member of ECU’s Global Macro Team and Global Macro Strategist at VTB Capital, having been ECU’s Chief Currency Strategist for six years.

Previous roles include Chief Currency Strategist at both Citibank and Merrill Lynch.
From 1982 to 1986, Neil was an economist with HM Treasury, where he worked for the Chancellor of the Exchequer and other UK Treasury ministers.
Neil sat on the Advisory Council of Business for Britain.

Kit Juckes is a long-standing and independent member of ECU's Global Macro Team and Head of FX Strategy at Société Générale.

Kit has over 25 years’ experience having commenced his career in 1985 with Money Market Services International (which became part of Standard & Poor’s).
His former roles include Chief Economist at ECU, Global Head of Research at RBS Global Banking & Markets and Head of Bond and FX Strategy at NatWest Markets.

Simon is a long-standing and independent member of ECU's Global Macro Team, specialising in China and some of the major industrial commodity markets, notably copper.

In 1975, Simon Hunt founded Brook Hunt, a market leading provider of market analysis across the metals and mining markets (now part of Wood Mackenzie).
In 1996, Simon left Brook Hunt to form Simon Hunt Strategic Services which provides global economic research services.
Simon has spent 2-3 months a year for the past 20 years visiting factories across China and has an office in Beijing.

Rashpal Sohan is Senior Macro & Quantitative Strategist at ECU, specialising in building fundamental and technical quantitative modes for use in global tactical asset allocation.
He has a decade of experience in Asset Allocation, having previously served as Senior Asset Allocation Analyst for one of the UK's largest discretionary investment management firms, Rathbone Brothers.
Rashpal holds a first class honours degree in Actuarial Science from the London School of Economics, and is a qualified Financial Risk Management (FRM) professional.
© 2020 The ECU Group PLC